It's funny how much trust we put into technology when dealing with our diabetes.  We trust that our meters are going to give us the right numbers and we trust that our pumps will deliver our insulin. We even trust it when we are sleeping - a time when we have no control and sometimes no reactions to blood sugars. We trust that it is doing it's job and when it fails us we get that realization, or reminder that it is just technology and it's not going to be perfect. 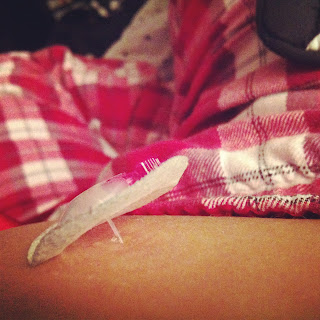 This morning when I woke up, I did my usual routine of heating the kettle to boil water for my oatmeal, while I checked my blood sugar and gave myself insulin via pump.  By the time the water boils, my pump is usually done administering insulin and I begin enjoying my morning before I have to actually do anything too productive. However, the kettle was already boiled this morning, so making oatmeal was quick, therefore I was still eating oatmeal as the insulin seeped into my belly.

This is fine, however, then I felt a vibration and not the single vibration to tell me my bolus is finished,  but that longer vibration that tells you bad news. My first thought was that the reservoir was almost empty and I needed to change it.  Then, I was surprised to see no delivery, mind you I had downed half my oatmeal at this point.  So, I tried again... not too worried about how much was actually administered because I have the food in the house anyways. Second time around, no delivery.  So, at this point I am freaking out a little bit because I had just changed my site the day before because it ripped out in bed. I did notice that my blood sugars were a little higher than usual when I woke up (not super high, but 9/162) and as I was debating on pulling out the brand new site (more financially painful then physically) my pump vibrated again.

So, before freaking out even more, I pulled the site and put in a new one. A new location, a new site...and I attempted again to bolus for this oatmeal I had almost finished.  Then, it worked and I was prepared all day had it decided to fail again, but nothing happened.  I researched online if others had encountered this issue and most said when they called, they were told if it happens within the next month to call.  Maybe I should have called, but after playing around with it, and still not finishing my breakfast, I had wasted about a half an hour and I carried on with my day.

It made me realize though how we have taken technology for granted in the sense of relying on it. We just believe that it is going to be right or that we can trust it. Like good cars we trust to be safe on highways and good laptops we trust with our thesis papers.  It's not surprising that we trust machines with our lives.  However, I think that even though we run into these hiccups along the road it isn't a reason to fear technology. We just have to be prepared for when it decides to do it's own thing.