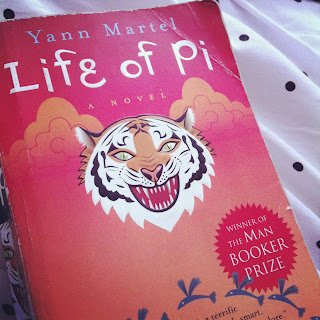 After watching the movie, then reading the book followed by watching the movie again (this time in 3D) I decided that my conclusion for Life Of Pi must be not only in my mind, but on a blog post.  It was by far one of those books that have left me really thinking much like Eat, Pray, Love did. It made me think about so many different things like, survival, religion and just life in general. It seemed that when I was able to crawl into bed and read the book I found myself feeling better about my own situation. Crawled under a few blankets, warm air coming through the vents, food in the cupboards just outside my door - little things like that that most of us take for granted.

This book to me was about many things beyond a kid stuck on a lifeboat with a tiger.  It was about so many things and I feel bad that my grade twelve teacher didn't make us read this book like most of my friends teachers apparently did.  But, being where I am in life now, with my experiences now I think I got much more out of this book than I would have when I was seventeen, rather than now at twenty two.

I won't go into great detail about my self discoveries after reading this book and watching the movie twice. But rather a strange thought that floated in my head just before I was about to fall asleep after reading my nights share of the book.  I am actually surprised that I hadn't had a dream about it considering most nights it was the last thing I thought about.  However, just before bed I would think about what I would do.

Strangely it didn't even cross my mind until a few nights in that - ugh... I am diabetic if I was stuck on a lifeboat I would be in trouble. Then all previous ideas vanished because how could I truly do anything if I was without insulin on a lifeboat.  I mean, I am sure I would survive for awhile, but ultimately I am not really sure.  Note to self: google to see if any diabetics survived ship wrecks and lasted as castaways.

It's one of those things though, getting stranded on an island, surviving a plane crash - freak accidents that we don't think about and if we do, we try not to imagine being without our life supports.  I remember a nurse, that is diabetic, was telling me that she is so scared of the elevator because she feels like something bad will happen to her when she is in the elevator - so she always brings stuff with her.

I guess, at times we think about being without supplies for things that we do a lot, like driving or taking an elevator, but we don't think about those crazy things that don't and won't really happen.  I guess it's for peace of mind.. but still... it's hard to imagine!