Seeing other people with insulin pumps or just people that have diabetes in general has got to be one of the most exciting things for diabetics (in all senses of exciting diabetic things that could happen.)  I feel like as diabetics we are always on the alert for other diabetics.  We hear a tiny noise that sounds like a pump alarm and we are turning our heads around searching for the person with the retired pancreas.  It's funny because most of the time it turns out that the noise is just coming from your own pump. 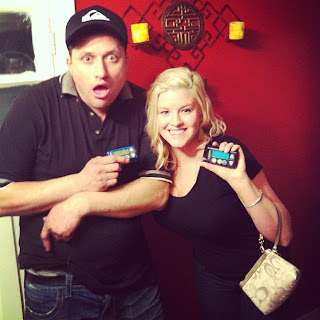 Last night at a friend's party I was talking to someone, that I hadn't met before. Somehow the topic came up and I said that I had diabetes and he quickly pulled out a small metformin pill out of his pocket and was like, "I am type two!" Even though our stories were a little different, I couldn't stop laughing at how funny it was that he just pulled out his white pill as if I would pull out my insulin pump. So, at this point I was exciting even though he was type two (as if it is some kind of divider) but then, he points to a guy who was just walking into the room and says, "But, he has type one!" Can you imagine the excitement I was feeling at this moment.

I instantly ran over to the guy whom I had not noticed at all before and asked him if he had a pump.  At this point the others in the room that didn't know about diabetes were probably scratching their heads with confusion as I pulled out my insulin pump from my shirt and he pulled his out of his pocket and we started talking in diabetes lingo.

I instantly had to run upstairs to grab Vince to show him the diabetes club that I started in the basement. It was so sweet to hear him talk so nicely of me and my experience with diabetes.  I guess, I knew that he was super supportive, but hearing him 'brag' about me and my accomplishments made my heart smile.

Afterwards, John (the type one) said that when he sees others with insulin pumps he makes sure he 'cheers' pumps.  He then joked and said we should do a celebration bolus...after checking my blood sugar I had to do a pretty big celebration bolus.  All in all it was a good night, and Vince had to laugh at me saying that I somehow always find diabetes in every situation.