Diabetes on the Internet

Does the internet really help those living with diabetes?  Beyond googling what the carbs are in a milkshake, beyond sending a email to your nurse asking if you should change your basal rates, and beyond responding to your mom via Facebook about how your blood sugars are doing.  Is the internet hurting our understanding of both diabetes and ourselves?

This is a hard question because most of what I do for diabetes is via the internet.   For instance, this very blog, or the type 1 diabetes meme page I started years ago.  I believe that so much good can come from connecting via the internet, because firstly you can reach more people and secondly you can keep connect to those that don't live close to you.  The internet has become our way of dealing with issues and chances are those cute journal books we used to write in, are long gone.

Sometimes I want to delete myself from diabetes related conversations via the internet. I want to shut it all out and focus on what I am dealing with at the moment.  It's hard to take on the burden of others struggles, and then in turn compare them with your own.  Am I worthy of feeling frustrated that they don't understand my point of view? Am I worthy of feeling stressed about my current situation, when theirs seems worse off?  Comparing, consulting, confusing.

A few months ago, I left A LOT of diabetes groups online because I couldn't take it anymore. I felt myself comparing myself to others, I felt myself trying to consult those that I felt were struggling and I was confused at what my place was.  We are all living our own lives, yet rely so much on how others perceive us, good or bad.

I think about my local empowerment group, where we meet in person weekly, interact, share our frustrations and opinions and can't help but think of much of a breath of air that is. Connecting, face to face, and getting to know one another in more ways that what we post via social media.  I want those deep rooted connections, yet I also want to have the platform to express how diabetes has played out in my life.

It's a tug of war trying to find that balance between being an advocate, having a platform, but still stepping back and realizing when this isn't fulfilling my time and I am going to let it go.

Posted by Kayla Brown at 2:29 PM 3 comments: Links to this post

It Takes a Village

"I checked to see if you were breathing twice in the night. Once before I had fallen asleep, and the second I woke myself up to check. I looked over and watched the covers raise up and down and I knew you were alright. "

This isn't something you want your loved one to have to say, but knowing that they did, is both heartwarming and tragic at the same time.

This past weekend something was in the air, my blood sugars were ridiculously high for a ridiculously long time. Despite a complete change of my site, insulin and the whole shebang, I still was trudging through the brutal highs, feeling less than human with zero patiences and zero ambition. While this is awful for the person dealing with the highs, I'd argue is it pretty brutal for those around the said, high person.   I am sure we, as type 1's with high blood sugar, are nearly impossible to reason with or even speak to without getting us all riled up (for what appears to be no good reason).

The first night of high blood sugars, I must have gotten 5 complete minutes of sleep. I had to visit the bathroom so frequently, I was considering moving my blanket and pillow in there.  I woke up feeling like garbage, and had a breakdown at the grocery store because I couldn't find macaroni salad for a party we were going to.  I literally had zero energy and felt like I was walking in a weird fog.  I was checking my blood sugars and watching them barely budge, it would go down a few and then up another couple a few hours later. Like an awful teeter-totter that I just couldn't get off.

I once again changed my site, and new insulin and checked frequently until it was time to go to sleep.  Mike asked if I should stay up, but I knew that that meant staying up for awhile, there was no way insulin was going to drop my 28 mmol/L blood sugar within the next 30 minutes. For anyone that has had a long period of high blood sugars,  knows that your 'care' begins to slowly float away. I just wanted to sleep, I was pissed off at my diabetes and I was done dealing with it.

Thankfully, Mike was not done with dealing with it. He was worried, and checked on me in the night.  It hit me in the morning (when Mike said he had checked if I was breathing) that it takes a village to take care of one person's diabetes.  When we feel like we literally cannot, someone can and most importantly, someone will.

On The Go: CONTOUR® NEXT ONE 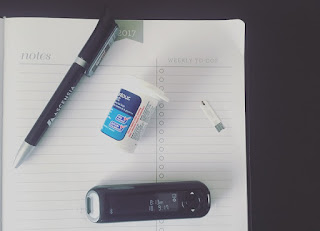 It’s always a good thing when you realize that your diabetes supplies simply fit into your lifestyle as though someone had kept that in mind (which I am sure they do!). For those that live with type 1 diabetes, the battle of having to remember, carry and use your diabetes supplies can be hard when you’re the type of person that is busy or just never stays in one spot!


Having a meter that is small, yet packs powerful technology is not only convenient but in my opinion an absolute must. The CONTOUR® NEXT ONE by Ascensia proves that you can have it all. A meter small enough to stick in your pocket to avoid feeling like you have to lug around extra weight. It is also a meter that connects to your smart phone so you can easily view your results in a hurry and later analyze them to understand your blood sugar trends. How impressive would that be to bring to your doctor's appointment or better yet, to email to your doctor in advance? Finally, it is also a meter that uses smart light technology, which alerts you through the flash of a coloured light whether your blood sugar in in range.


For those like me that are constantly running around, this meter is the perfect way to keep yourself on track with testing your blood sugar and to be able to later review your blood sugar results via an app on your smart phone.


Learn more about the Ascensia CONTOUR® NEXT ONE at www.contournextone.ca.


This post was sponsored by Ascensia Diabetes Care Canada Inc., but the thoughts are my own.
Posted by Kayla Brown at 9:09 AM No comments: Links to this post