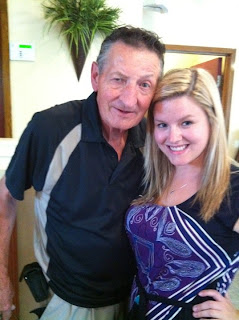 Motivational speaking, who knew that I would be apart of that!  Never in a million years would I think I would be standing in front a group of people speaking about how diabetes has changed my life.  But, I also would have never imagined being diagnosed with any kind of disease!

Today was the CDA Golf Tournament in Burford.  After the tournament was done the 65 golfers headed inside for a nice steak dinner, auction and door prizes. Also within that I was up for speaking.  I had my powerpoint on hand and told my story of living with diabetes (something I make up on the spot because I live it!)  No papers or scripts needed - diabetes is with me everyday I have LOTS to say about it!

The speech went really well and I was so excited to share my story with everyone and hear all the positive feedback afterwards.  I am looking forward to doing more events with the CDA and hope that I have touched a few lives in the process.

I Survived the Warrior Dash 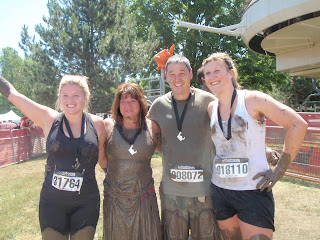 On Saturday we geared up for the craziest race of my life yet and I am sure others can agree.   Before the race even started we were shocked about how many people were there - thousands! Some dressed up in extreme costumes while others just ready to take on the race as is.   Either way the one thing that stood out to us was the big "Medical" tent filled with beds and not only beds, but people.    If that wasn't alarming enough we got to see the gashes and broken ankles first hand as they were carried to the tent by paramedics and volunteers.... was this a good idea?

The start of the race was slow, with such a high volume of people (despite having races every half hour) we walked until we reached a bigger pathway and then we began to run (but that only lasted a couple minutes) we then hit a HUGE mud pit.   Now, I have done the mud run for 3 years now and I have no seen this much mud!   Wow, there was no chickening out, no going around and no tip toeing.  This was the start of something that was unlike any other race I had done before!

After treading through the mud our shoes were like big bricks, with some speedy running the mud flew off and we headed up hills and more hills (I had no idea we were at a ski resort until my dad had pointed it out... maybe that would have been a good thing to know before hand)  Either way we eventually reached another obstacle, we had to climb under a black tent with wood bars underneath... basically crawling on our hands and knees in the dark.  Not bad, not bad..

Then we were back to running and running, but more like walking and walking. It was extremely hot and the hills were almost impossible! You could see many people sitting on the sidelines with paramedics, most likely dehydrated.

The next obstacle was a large wall with a rope, it seemed like it would be difficult, but it wasn't too bad.   The paramedics cheered us on on the sidelines!   After that came the big web, I think the only reason this was difficult was because my mom kept flinging the strings back when she was done getting untangled.

Next was the giant hill we got to go down.   As we watched one girl go down on her bum, we though we would try it. Man, did I fly! However, at the end of it I had worn a hole right in the bottom of my yoga pants!  So for the rest of the race I was trying to cover my bottom!

Next came the ropes, we had to climb over.   The fact that there was a guy with a hammer fixing it every couple seconds was a little worry some, however, safety first right?  Next came the tires and junkyard!  My mom believed she was a pro at the tires and took right off bouncing from one to another without looking back.   Climbing and stepping on the cars felt a little strange - since when can you do something like this!  It was fun!

The giant hay hill was next! It was a little wobbly heading up the hill, but mom showed us the way down.  Jump, tuck and roll! She was so impressed by it (or we just thought it was too funny not to do again)  she climbed back up and did it again!

Then it was the giant slip and slide down the ski hill!  However, it was on rocks, someone didn't plan this out very well, or they wanted us to get injured. Stephanie ended up cutting her arm on the rocks below it.  Thankfully we were done shortly!

All we had left was the big rope climb, which wasn't bad, but behind it you could see the fire. THE FIRE! The thing that scared most people away from signing up.   We hesitated a bit, but then took a run for it!  After all the paramedics and fire fighters were standing by...

Then came the barbed wire, but guess what! No barbed wire, just chains!  However, the mud was so rocky it was painful to crawl on your hands and knees to the finish line, but once you got there it felt good!   We had completed the Warrior Dash, or should I say Survived!
Posted by Kayla Brown at 8:51 AM No comments: Links to this post