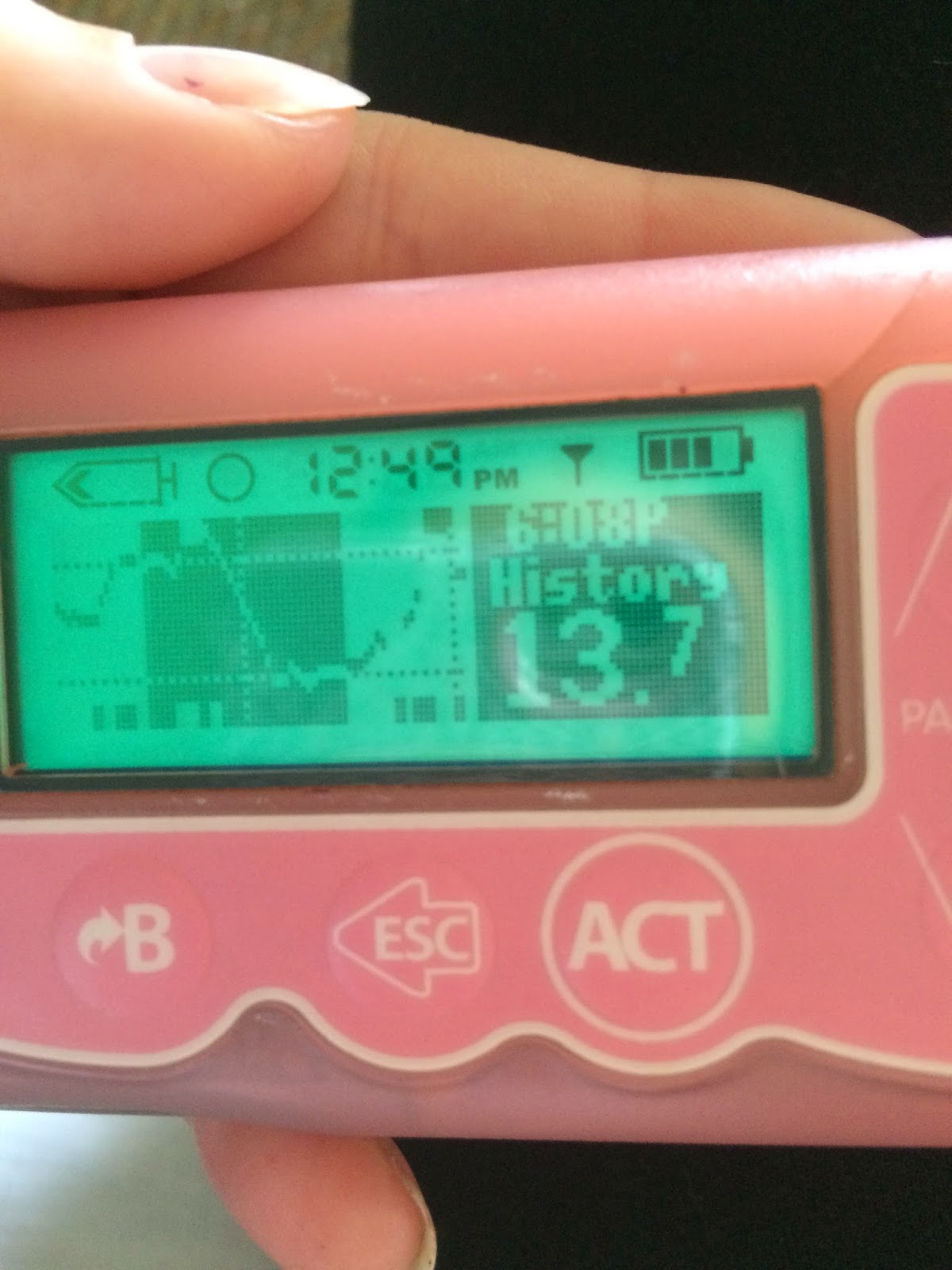 At first when I got my CGM, my blood sugars were amazing. In fact, I think if I printed it off and handed it to a random diabetes educator, they would assume it was someone without diabetes. I was almost flat lining (in a good way) and was avoiding lows and highs like it was my job . . .  okay, I guess it is my job.

However, routine is a big secret in managing diabetes.  If you have sporadic days, that can lead to sporadic numbers.  Maybe this isn't the case for everyone but I think a lot of people could relate.  I am very much a routine person.  It's really the only way I can get things done.  With my job, as a Nanny it can be easy to get into routine because the girls are pretty structured now that they're in school.  I have free time during the day and if I didn't establish a routine in that time I would be doubling up on my data with Netflix and probably vacuuming so much, my carpet would disappear (I have that tendency when I am bored, weird I know.)

Anyway, I've established a routine that worked for me and I've been successful thus far, dropping 4.5 pounds in nearly a week and a half. For me, it's not about the weight. I mean, I do want to lose weight - who doesn't. But, I am more concerned about feeling good, that's it. Just feel awesome.

Blood sugars play a HUGE role in feeling awesome, trust me.  Like, it's unbelievable how awesome I felt when I was flat lining (in a good way) on my pump.  I felt like I could run around the block 100 times, and I didn't get frustrated, stressed, angry, annoyed...I just felt good.   However, we know that just because we establish a routine, eat well and exercise that doesn't mean you're going to have good blood sugars. If it was that easy, then we would all be scarfing down the healthiest foods, just to feel awesome.

I pretty much eat the same thing every day. Earlier I wrote a post about what my average day entails as far as food and while I switch it up (not breakfast) with different items in my smoothies, and a different veggies for dinner. Overall, my food intake is fairly similar, every and everyday.  So, you'd expect that your blood sugars would be the same each day, but of course not. We as diabetics, know better. It's not that easy.

I admit this morning, it was on me. I forgot to bolus (take insulin) for my breakfast. Honestly, I got to sleep in for the first time in forever (Frozen song just popped in my head) and it was glorious.  I ate a bit later in the morning and I also woke up with a blood sugar of 10 mmol/L which is abnormal for me (however I went low three times at night, thank you wine.....)   I corrected for the 10 mmol/L but in turn forgot to actually bolus for my food, shooting my blood sugar up to a lovely 20 mmol/L.   Hey, it's hard to remember to be a pancreas sometimes.

Now, that was my mistake, forgetting. However, the day before, I did exactly the same thing as always. I ate the same things, and did the same type of exercise routine, yet, I was literarily 14 mmol/L the entire day. I would admit if I did something wrong, but honestly, everything was the same.   My site was fine, my insulin was O.K.... there was no reason, and I instantly felt defeated because I knew how well I was doing, I knew what awesome felt like, and I wasn't feeling awesome.

It's amazing what blood sugars can do to your mood, your mindset, your ambition, motivation and self esteem.   You instantly blame yourself for a job not done right, when in reality, dealing with diabetes isn't an easy task, no matter how healthy you eat, or how much you go to the gym. It's about taking each day at a time, and accepting the highs and lows of diabetes and not taking the numbers to heart, but not ignoring them (there is a fine line...)

So, as much as I was putting myself down for awful blood sugars and especially this morning when I wanted to scream at myself for forgetting to bolus, I took a deep breath and told myself, "It's not your fault..." and I forgave myself for making a simple mistake and also reminded myself that diabetes isn't a cake walk...and if it was, how difficult would that be...ugh cake.

Kayla
Posted by Kayla Brown at 12:57 PM No comments: Links to this post