You Are Not Your Number

I think it's a common problem among diabetics. Checking blood sugar can be a big hassle even though it can literarily be a five second process.  The facts of the matter are that checking blood sugar can feel time consuming and it can feel like a major interruption of what you're doing. Also, sometimes we can have a fear of checking in case we see a number flashing back at us that is not to our liking.  It is almost like we don't have an angel and devil resting on our shoulders, but rather, a socialite and a endocrinologist. 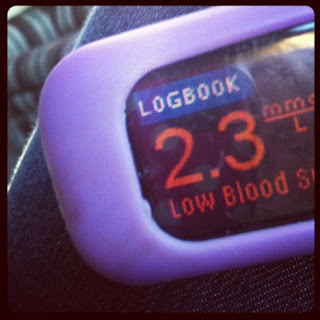 For me, I am not always on the ball with checking my blood sugars and sometimes it's the mere fact that before I know it the day is over. But, to be honest sometimes it is that fear that I don't want to see what number is flashing back at me.  I find that when I know I have ate healthy all day or I have paid close attention to carb counting that I am more likely to check my blood sugar from when I have been eating junk all day and loosely carb counting.

I don't think this is something just pertaining to type one diabetics, for instance I know that my Grandma with type two diabetes only checks on Wednesdays. She doesn't check other times because she feels like it will be a bad number.  Being type two, she isn't advised by her doctor to check as much as say a type one diabetic, so the numbers she does record she attempts to make look close to perfect.

For me, I have been working on getting over that feeling that I am the number that appears on the screen. It's almost like a weight scale. Those who feel like they have been eating bad and not working out tend to not step on a scale compared to those that are working out, eating healthy and have noticed their pants fit a little baggier.

If my blood sugar is high, technically I am high too, but that doesn't mean that I am a 'bad' diabetic.  Unless your endocrinologist appointment is coming up within the next few weeks then you are likely the only one to see those numbers at that time. When you know your number you are more likely to be in control knowing what to do next rather than guessing.

I keep my meter close by. I find if it is laying around by me, such as on my desk while I am working, than I am more likely to check.  If it is hidden in a backpack I am less likely to go searching. Also, even if you're not one to be keen on checking, try to set a goal number (hopefully at least four) and pretend it is like a game. Just get up to your goal number and slowly increase the number to hopefully get that extra control - but always remember that number that you see isn't a reflection of you!