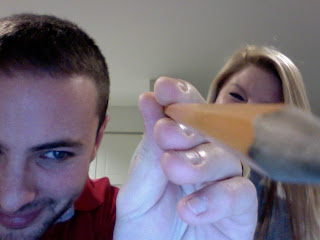 I don't know how many shows I have seen that make jokes about diabetes.   Vince and I were watching a couple episodes of Modern Family and in two of the three we watched they joked about diabetes. Of course I laugh!  I don't take the jokes to heart and if anything I am glad they are in some way acknowledging diabetes despite the jokes often being exaggerated.

It always catches my attention when they say something about diabetes or insulin etc.   But, it also catches everyone else's attention around me, as they look at me after it is said to see if I am going to give some kind of reaction.   I often wonder what other people think of it though. I can't imagine that everyone finds it entertaining.

The best way to look at it, if you are offended is that if diabetics got together and made a comedy, chances are we would make jokes about non-diabetics asking silly questions and being extra cautious around us.  I am sure that our version of a show like Family Guy would contain a family with a diabetic child, where the mother is constantly asking her daughter if she has her supplies and the neigbours always bringing over sugar free baked goods for the 'diabetic.'