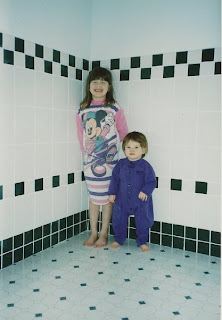 A lot of the diabetics I have met have been a part of a diabetic camp at some point in their lives.   They have built a strong community of diabetics that all enjoyed swimming in the lake and playing crazy games while all having to routinely check their blood sugar and give insulin injections every now and then.   It seems there is always a chain that links all diabetics and usually that common denominator is camp!

For me coming so late in the game, I began to wonder what I would have thought about this camp had I had the chance to go.  I can only imagine that it was like the similar 'camps' that I get to do now as a young adult with type 1 diabetes. I wonder if the camp really made diabetes any easier as a diabetic kid.  But, then I think to myself as much as I would have probably found the camp fun, in no way would I wish to have been a diabetic kid.

You see, there isn't anything wrong about being diagnosed so young, in fact those people often prefer their early diagnosis since they don't know any different. Me; however, age eighteen was a fine time for me, if there was ever a good time to get diagnosed with diabetes. I did enjoy almost nineteen years of being a non-diabetic and really didn't have any health issues growing up.  My parents weren't chasing me around my backyard wanting to draw blood and if I was called down to the office it was probably to retrieve a bandaid from an accident at recess.

I often get to talk to people that were diagnosed at such young ages like four, six and ten.  At those ages I had no idea that children around the world were having to take needles daily - that would have sounded like a nightmare to me - yet here were thousands doing it, being brave little children while I was dressing my barbies without a care in the world.

A few comments I often here from diabetic kids, who have since become adults - "Wow, it must have sucked being diagnosed so late!" or "You probably got to go on sleepovers!"     Kind of a mixed reaction, yet I don't think any of us really dwell on what age we were diagnosed, instead we live each day with diabetes hoping for good numbers, a clear head and no hassles.
Posted by Kayla Brown at 12:42 PM