Often times we think about our future in aspect of what career we will have, who we will marry or what city we will settle in. However, as a person living with a lifetime disease thinking about the future can be a little bit of a different thought process.  As much as we can be healthy by eating well, checking our blood sugars and giving ourselves insulin at times we can find ourselves wondering things like how long we will live for? will we have any complications? or can we have children? 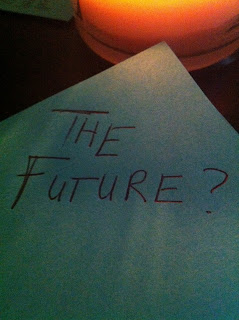 All of these thoughts seem to be thoughts of an older person.  Someone who is maybe just finishing college perhaps, but after talking to a mother of a five year old diabetic girl I began to realize something - these future questions don't appear in our twenties they are in us as early as five, at least. This mom had explained to me that she showed a picture of her friend when she was younger to her daughter and told her that she also had type 1 diabetes. Instead of feelings of hope - her daughter replied back to her, "is she dead now?"

The mother of the diabetic told me how heart broken she was when her daughter replied with that.  I am sure she did not expect to hear anything like that come from her five year old's mouth. But that's what happened and we cannot deny the things that we say or think.  To be honest, this broke my heart as well. I cannot even imagine what it would be like to hear those words come from a child and mostly because it appears that she feels as if having diabetes is something with bad consequences.  It's hard to think that that is what type 1 children are even thinking about.

It's hard to know what individually our futures hold.  As much as I try to live in the present I find myself on many occasions drifting to thoughts about my future - but luckily not truly thinking about my life span. It's with great hope that we see a cure in our future, but until then day by day we have to keep physically, mentally and emotionally strong.