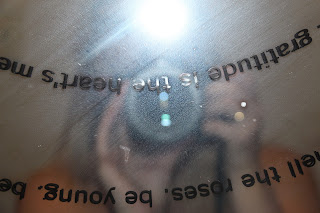 As diabetic we get used to our own routine.  Checking blood sugars, adjusting our pumps, treating lows - all come natural to us.   However, to those that are around us, we can be quite the entertainment.  I don't think people mean to stare - they're just curious.  Being curious is good, it opens up conversation if they're willing to ask.   Not too often do I get people asking questions without me initiating - but the other day in class I checked my blood sugar in class, tucked it back in my backpack and kept on taking notes.  When we had our first break the girl sitting beside me said, "does it hurt?"  and at first I had no idea what she was talking about, then she pointed to my fingers..."does it hurt to do that?"  and I looked at her and said, "Nope, I have gotten pretty used to it!"  she just smiled at me.

I guess I could have had a conversation about it, but I had a lecture to pay attention to and considering she asked me that, I figured if she wanted a lecture on my diabetes she would have asked more.   There is a time and place for everything and the general public only wants to hear so much.   After the class was over the girl on the other side of me told me that "that thing" i.e my meter "was cool!"  and I thanked her and told her about how it can plug into the computer...just to add to the conversation.

It's funny because to me diabetes has become so ordinary.  I forget that others aren't doing what I am doing or worrying about the same things that I worry about.   It's a much different life for people without diabetes - of course we all live different lives, but it's funny to think how foreign the tools and lifestyle of a person living with diabetes can be.