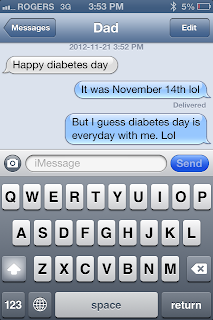 Explaining diabetes can be quite the task and to be honest after doing it so many times you basically leave out most of the details and stick to the, "type 1 kids, young adults, insulin injections no cure/ type 2, old, overweight, pills, diet and exercise."  Obviously there is much more to diabetes than those things and yes I know, these are a little bit of stereotypes, but when you've explained diabetes one thousand and one times - you just need to get to the basics with the those that are asking and if they seem extra intrigued you can go back a little and start explaining some more.

My mom and I went to a party this evening and some of the people I hadn't seen since I was kid and to be honest I did not recognize most.  Of course somehow or another the topic that I was diagnosed with diabetes came up and I was prepared to give the definition as people nodded their head at me saying, "well you look great..."  ah - I know what they're thinking:  'she's not fat? how did she get it? Did she loose weight and now she's cured?     Mom was pretty good at explaining and then I would just jump in to answer a few of the questions like, "will it fade away over time?"  It's truly hard not to start laughing       if only it were true... simply fade away.

I actually enjoy talking about diabetes, but when it's a quick thing it can be a little hard because on one hand I feel like giving them an encyclopedia of information about diabetes and what I am up too, but on the other hand I know that most people are asking because that's the polite thing to do.  It's just hard not to take it as a moment for education and being November and all, it's hard not to shout at them, 'I like your moustache for Movember, but did you know it's diabetes awareness month too!'

There is so much education to be given about diabetes, and the questions that we have all encountered along the way is what keeps my Type 1 Diabetes Meme page going I think.  It's incredible the amount of misconceptions there are about a disease that truly is simple in context of what isn't working properly.   Sometimes I wish that diabetes really was what the public thought, a disease that kids grow out of, or a disease where you don't need the needles unless you're REALLY bad.    If that were the case I know thousands of us type 1's would be on treadmills daily eating well if it meant no more needles.