If YOU could walk in my shoes...

Blood test strips scattered underneath the bed, hidden under couch pillows and piled in the bottom of a backpack. Empty insulin vials filling up a lunch bag in the fridge among them, half full vials that will be empty within a couple weeks time. An insulin pump tucked in the back pocket, vibrating for attention. Another meal on the table, another calculation and press of buttons before enjoyed.  Can you imagine the life of a diabetic? 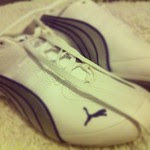 For most, this life has become so routine, the sight of blood test strips scattered around has become part of the decor.  The smell of insulin - that potent reminder that that's the stuff that keeps us alive... while this is something as diabetics and supporters/caregivers of diabetics see as 'normal,' from the outside we are viewed in a much different light.   Somehow the picture of a diabetic to the public can be seen as someone who enjoyed too many sweets, never stepped foot in a gym and is on his/her way to a retirement home in Florida.  Meanwhile, three year olds are totting backpacks of supplies, clipping insulin pumps to their overalls and seeing blood not from scraped knees, but from their finger tips 5+ times a day.

I often wonder what others would do, had they been given the chance to walk in my shoes?  Maybe I make diabetes look easy, like putting lipstick on a pig - when in reality diabetes will be your best friend one hour and then be your worst enemy the next.    There are certain people who won't understand; however, and I think we run into them often despite what the issue may be.  Those unsympathetic people and no I am not speaking about anyone in particular although it may seem that way.   It isn't until you get a taste of it for yourself, that you realize how tough it truly can be.

That is where once again education takes place, and not the kind where you take over the world by making every single person learn a thing or two about diabetes, but in the sense of correcting the misconceptions; rather than rolling your eyes or going along with it.  Not being afraid to check, pump, inject in public in fear of reactions, but embracing the life you were given and using it as a tool to teach.  I don't blame those people that aren't in the mood or frame of mind to start a blog about their diabetes life or give daily updates via Facebook, but for those that are like me, ready to break barriers and reach out to those not only who are uneducated about diabetes yet making judgements about it, but also for the diabetics out there who don't know how or want to speak out to ask questions, learn more and get the resources that they need.

So, if you have a loud and proud diabetes voice don't be afraid to USE it!