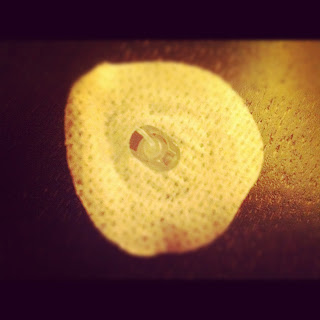 There is always diabetes mishaps despite trying to be on the ball with everything. It doesn't take much to forget to bring an extra battery or rip a site out of your stomach with a door knob.  But, there are those odd times when diabetes fails you and it just isn't your fault.   For instance, I was sitting at my desk today writing an essay and smelt insulin.   I thought about for a second, but came to the conclusion that it must just be in my head, so I carried on with my writing. Then I started getting that dreadful, 'I'm high headache,' so I checked the blood sugar and was high.   I knew I had taken insulin about 1.5 hours previous, so having a high blood sugar seemed a little odd.

I looked down at my site and realized the outside of the site (the white material part) was soaking wet.   Instant realization that my site is leaking and it needed to be pulled out, even though I just put it in.  The cannula was bent and leaking into the material rather than into my stomach. Such an annoying feeling having to rip out a brand new site and put in a new one plus deal with a high blood sugar.

I like to think that it wasn't my fault for putting the site in wrong, but then again it's not an easy thought to think the site failed to do its job.  Thankfully, the smell of insulin is a strong one and I was able to recognize that something was up with the site and in turn I needed to take care of a high blood sugar.