I often have diabetes on the brain, whether it is thinking about my next blog post or what my blood sugar could possibly be... It's funny because I don't tend to often dream about diabetes despite thinking about it so often, but the odd time I do.    The funniest dream was that I was locked in a candy store, with shelves and shelves of candy stacked on top of each other.   I remember whoever I happened to be locked with told me that I could have whatever I wanted from the bins.  My reply was, "No, I can't have all of this, I am diabetic."   Afterwards, I woke up mad. Wishing I indulged like that of a non-diabetic lacking consequences of high blood sugars, instead I was somehow a responsible diabetic even in my sleep. 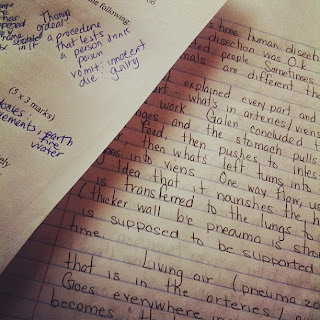 I think this happens to a lot of people, always having it on the brain...saying diabetes related words when you mean to say something else or typing diabetes into youtube search engines. It's one of those things for diabetics and/or their supporters that they never can get a break from despite knocking themselves into a zombie-like-state sleep.

It's a disease that has taken over our vocabulary, interrupted our schedules and formed our everyday conversations.  Something that we can't just forget about or set aside.  Since this is diabetes awareness month, I have noticed  a lot of my Facebook friends talking more and more about diabetes than usual (yes most of my Facebook friends are diabetic...) and this really has made me think about how much emphasis we have allowed ourselves to take from this disease and no wonder we are dreaming about it or mixing up our words or find us daydreaming about new diabetes inventions or what it would be like if there was a cure.

It's the fact of just going with it, like my post from yesterday, by taking it and being positive about it and not allowing yourself to neglect your responsibility of taking care of yourself and that is why we are talking about it, reaching out about it and in turn accepting that it's going to be on our brains,  written and scribbled out in our essays and in our dreams.