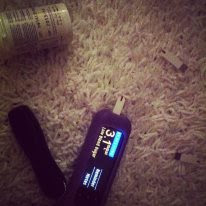 Forgetting you have something won't make it go away, but having a positive view about it can change the way you deal with it.   For me, diabetes grew on me like an extra limb, something that I knew was there, constantly thought about and wanted to change.  But, not change in the sense of making it go away, but change the 'typical' view about it because that is what I needed to do in order to deal with it.  So, that is why I started things like this blog and the meme page on Facebook, because I knew that I couldn't forget about it to make it go away, but I could have a positive view on it to be able to deal with it.

Today in my Altered States of Consciousness class (which is by far the strangest class I have ever taken) my professor mentioned something along the lines of healing people without actually touching them, or even physically being present...which is interested, but what I got from it was that he began to talk about thinking of the 'disease' as not being something separate from oneself.  This really made me think about how diabetes is just a disease, it is a disease that a lot of people have, humans and animals.  I know that in medicine, diabetes is treated with insulin or pills, diet and exercise and there is scientific reasoning for what goes on in the body etc. However, I have never seen diabetes this way.  Is it possible that instead of seeing diabetes as something separate, I have managed to see it as apart of me?

I think I just got hung up on the idea that diabetes is just a disease just like my professor pointed that out of cancer.  Why have I got myself twisted around this disease like it is apart of my makeup in sense of who I am as a person?  I have taken something that to doctors is a disease that requires insulin, to scientists is a formula, but to me is as important as my interests in school, the way I style myself and the person I am today.