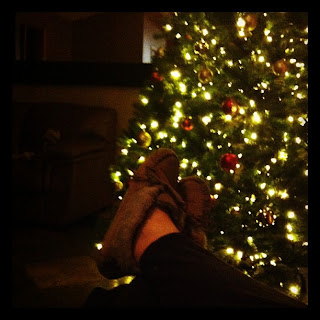 It's that time of year again, well it's still November, but go into any Mall and you're bound to see Santa sitting in the middle and Christmas music playing throughout the stores.  Not only is our budgets going down the drain, but most of us are going to be pumping more than usual amounts of insulin into our bellies. I find Christmas to be a time where carb counting gets thrown out the window and it because a huge guessing game instead.  No one knows what Aunt Annie puts in the pudding, but let's say it's 40 grams.  You know exactly what I'm talking about, don't you!

Unless you have a parent that is willing to follow you around with a calculator and a salter scale, I highly doubt that most of us are being perfect diabetics - Thankfully Santa only decides on gifts judged on your personality and kindness not your blood sugars!  This year, like the past three Christmases that I have been diabetic, I am going to just go with the flow.  It's like vacation, you try your hardest to keep up with food and insulin ratios, but in the end it's really only a week or so out of your life that you aren't  'doing it' right.

I feel bad for those that have to attend endocrinologist appointments around this time of year. I would hope that most of them would be a little easier on their patients realizing that cookies are being thrown at them non stop and will power is usually absent.  Either way, for anyone that is tackling Christmas for the first time as a diabetic, don't let diabetes discourage you from enjoying this time of the year.  Have the cookies and cakes you desired when you were non diabetic and attempt to stay on top of them - much easier said than done I realize.