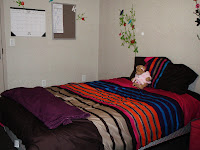 Sleeping in is pretty common however sleeping in can cause you to rush throughout your day and really promote more stress than normal. I tend to not sleep in as much now because a day without breakfast throws me off in many different ways.

First of all on average I don't eat after nine p.m simply because I like to keep my blood sugars normal throughout the night. So by the time 8:30 a.m comes around I am pretty hungry and looking forward to sitting down for breakfast like most people are. I feel that if I skip breakfast my whole day will be unbalanced.

This morning I had my alarm set for 7:30 a.m well so I thought. 7:30 a.m passed, I was not up. 8:00 a.m passed, I was still asleep. It wasn't until 8:30 a.m did I wake up not to an alarm but rather to my roommates going about their morning. I couldn't believe that I slept in. I had a class in half an hour, I had to get ready, eat and march my way to a class that was on the complete opposite side of the school.

I considered missing the class entirely, but I changed my mind. I quickly got ready, grabbed a granola bar and speed walked to building B. I was there early believe it or not, but had worries about how well I could hold off not eating until nearly 10:30 a.m. I had never once in six months of being a diabetic skipped an entire meal.

After my class I headed back to residence and had an English muffin and peanut butter. My sugars were actually high but I figured that was because I had a granola bar. Now of course another dilemma. My next class was at 12 p.m. I had just had breakfast, I didn't want to eat lunch within the next hour, so I skipped lunch.
All I could think was how much I wished my alarm just went off so that I could have ate at the normal times I usually did. My head hurt, my stomach hurt and I felt miserable. I didn't eat lunch until 2 p.m and my sugars were high again. I figured that the stress of the day had an impact on me. Eating at irregular times isn't normal for me and my body wasn't aware of how to react to such a change.

It's weird how something as simple as sleeping in can be a big obstacle for a diabetic. It changed the way I went about my day and made me really think about what I was eating and when I was going to eat it. It gave me a chance to work through my knowledge and in the end it ended up working out and now I know for next time.