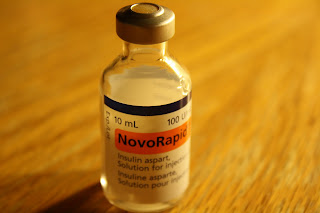 I do a lot of moving around, London by week, and Brantford by weekend. I go to all different places in between and with that I have to be prepared for anything. I don't know if anyone has ever taken a look inside the purse or backpack of a diabetic, but if you haven't you would be surprised at all the junk we lug around with us.
An unprepared diabetic is in for a lot of trouble because even though food seems always readily available it is not so much when you are on a highway with no exit for 100 km, or when you are writing a midterm, or when you are up in the mountains! I am sure my point is made - you never know when there actually will not be food available! Therefore diabetics have snacks beyond snacks (that hopefully they didn't eat before they actually needed it) and they probably carry Dex4 tabs which to anyone else look like giant Sweet Tarts.
With that there might be a couple vials of insulin! I do not know how many times I thought I had enough insulin in my pump and then ended up having to reduce my pump to about 50% in order to keep myself from running out. Not a smart diabetic - really I should always make sure I have insulin, or that I'm are within a nice range of a pharmacy where I can beg for insulin!
Strips, strips, strips those stupid things that just get everywhere, on the floor on the counter - so much that your roommates have named them your little minions. Those strips do eventually run out, even those 100 strip bottles. Pretty sure I have ran out of strips more than anyone else and it is always at the worst times!
Also, I don't know about anyone else, but when I forget to bring my meter places - I begin to panic. As if I would have checked my sugar 10 times in the hour that I was gone out, but hey all of a sudden I think I should check my sugar and know what it is because for some reason I now feel odd (i.e panicked...) So that is something that you will also find in a diabetics bag! Maybe even a couple? I personally carry both my USB meter and my meter that talks to my pump.
Another thing is those sanitize pads that if you have a pump you probably use to clean your skin before putting on a site. I don't believe it is the end of the world if these are not used, but I always carry a couple on me just in case! But most importantly pumper or injector, either or, the diabetic probably is carrying the stuff that helps them receive the insulin! This could be a site, needle tips, syringes, batteries etc.
So, now that you know some of the things that diabetics are carrying every single day - imagine these diabetics going to the airport! Ha!
Kayla
Posted by Kayla Brown at 8:38 PM