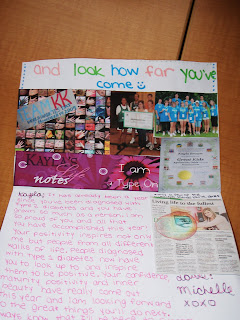 This is where it all began. A year ago today I let everyone know what I had been up to the past week but slowly it turned into informing everyone about what I was doing each and every day. Who knew it was was a start to something big.

My simple updates became more than just updates. Slowly my writing became words of inspiration to some when to me they were just my own thoughts and experiences. I began to realize that what I had started was never going to end, rather I was going to take this opportunity with open arms and make something of it.

My first note was on March 16th 2009, and I quote, "Since everyone is asking, which is so understandable, I thought I would sum it all up on a little note," I laugh now because it turned out to be one little note after another.

As the notes increased so did the readers, or at least I think so. It's hard to tell who reads my blogs or not since there is no way of knowing but every now and then I get a message from an unexpected reader that totally makes me smile and glad that I do what I do.

It's crazy to look back at 215 notes and think about how much I have changed and learned in the past year. I am so glad that I have been able to share it with all of you and I appreciate everyone for taking the time to read them.