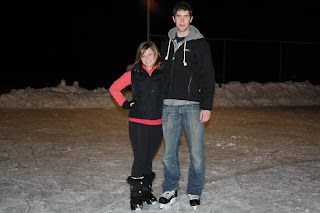 It's hard to explain how great of a feeling I have when I am surrounded support. I have never been in a room full of people, some strangers, that were so friendly and interested in one another.

Last night I went to the Brantford Best Western for a presentation by Endocrinologist, Dr. Amish Parikh and Olympian Chris Jarvis. It was amazing to be around people that are living just like me because honestly when you're surrounded by non-diabetics you never truly feel like they understand completely. As I looked around the room and saw other diabetics, young and old I knew that their schedule was similar to mine.

The doctor really gave me some clear information about my diabetes that better helped me understand the insulin pump. Since the majority of people there had insulin pumps it was a perfect opportunity to pick up some information since I start therapy on March 26th 2010.

In particular the lady behind me was a mother of a type one that was on the pump. We both agreed that the concerns of the pump are different for everyone. Personally, my concern was wearing it all the time and what would I do in a dress? Thankfully those questions have been answered and I definitely have been reassured.

Chris Jarvis was very inspiring, for he proves that you can do anything with diabetes. Despite his University coach saying that he couldn't row because of his diabetes, he ended up making it to the Olympics!

Among all the diabetes there was someone in particular that showed me unconditional support, and this particular person was right beside me. Clinton came with me and once again looked more like the diabetic than I did. He was so interested in everything and even began to ask Chris more about his pump. Secretly I think Clinton wishes he could get one too!

Clinton has come to pretty much every event/symposium that I have attended and we are also going to another one next Tuesday. Even though Clinton doesn't have to worry about checking his sugar or giving himself insulin he acts as if he does which gives me the confidence that I will always have someone right by my side.

I will never be able to express how much it meant for him to be there beside me and buying him a double/double from Tim Hortons wasn't clearly enough but he enjoyed it. Thank you Clinton.

In conclusion the day was absolutely amazing and inspiring. I love going to events for diabetes because you can really hang out with a bunch of people that are just like you. I have never truly belonged to a club or team but now I have more than I could have ever asked for.
Kayla
Posted by Kayla Brown at 9:16 AM