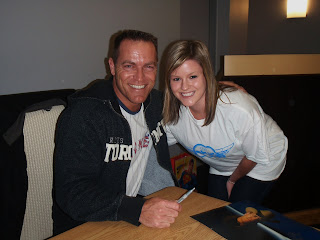 In a small room, type ones and their family sat in their chairs waiting for George Canyon to arrive. Animas, a company that makes insulin pumps gave helpful information to families interested. There were tons of snacks lined up, crackers, cheese, fruit and vegetables as well as drinks of all kinds. The majority of the room was children, I'd say under the age of twelve but there were definitely a handful of older type ones.

My mom and I sat in the front, I pretty much insisted. Of course with that George many a number of remarks about me, one asking what I wanted to be when I was older and another about the fact I didn't raise my hand when he asked where the teenage type ones are. Oops, I didn't realize I was still a teenager! It was fun though, George really is very kind and you wouldn't even know is success from music just talking to him, it must be because he has type one diabetes! (haha)

This was the second time I met George, first at the Hamilton Warplane museum and second in Brantford. It was an amazing experience and previous to this event, a pump wasn't in my mind but now I am definitely thinking about getting an insulin pump.

What really convinced me was when George said, "I think this can add years to my life." For some reason that really struck me. The pump although not perfect is much better than the method I use now, (four needles a day, 3 of bolus, 1 of basal) so it's possible that with better care and more accurate judgements that I could be living a much healthier life.

I wouldn't be surprised that by the summer I am writing about my brand new pump. I am thinking about a pink one. I think, for me, it would be a step in the right direction as far as giving me the healthy and long life I want and that everyone wants.

I told Clinton last night, likely the only thing that is holding me back is the way that it looks. Carrying around a GPS like object all the time, with a tube coming off you, as if you were a robot. People will notice it, some people won't but it was the idea that it wouldn't be 'normal.' However, if I needed to wear a brace, needed to have a cane or wheelchair, I would but because with diabetes I have two ways of getting insulin, needle or pump. I am choosing needles. So to convince myself, I must forget about those needles and think as if the pump was the best and only option for me.