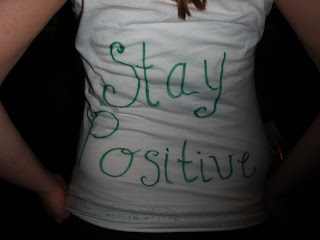 It's a weird feeling being in a room with a bunch of people alike. A crowd of people that knows what you're going through, how you feel and where you are coming from. I have had a couple experiences where this has been the case. A group of diabetics all together, a feeling as if we all know each other some way or another.

At the George Canyon presentation it was neat to see all the people, mostly children that are always dealing with diabetes. Some so young, that I could barely grasp how much information that they know at such a young age. I often wonder if I was diagnosed much earlier, what it would have been like. My parents would know much more about the disease and would have had to help me much, much more. Not that they don't help me now, but at least at my age dealing with diabetes I can do partially on my own.

I am so appreciative of those who are young with diabetes. I am amazed by every single child that is living with this disease. Candy is a child's best friend and when you're young that's what the world revolves around. I recall going to the candy store with friends at lunch and loading up on candy, or at birthday parties getting a huge loot bag full of candy and chocolates.

Children with diabetes are unbelievable, and every time I meet one, or see one I feel like giving them a giant hug. Here I am, nineteen, diagnosed at age eighteen and feeling pressure and fear when dealing with my diabetes, how do they ever manage at their age.

Any diabetic out there that was diagnosed at a young age, and now are a teenager, adult or senior, you're also amazing. You have went through so many different stages of your life and here you are to talk about them all. You have battled so much, so much more than I will ever know as a diabetic now. Your strength is admirable.

For those who have just been diagnosed like me, I know that there is hope and support. After awhile we will be much like the rest but right now we seem alone and scared. I believe that after a year of this disease the days won't seem as hectic and the rules won't seem so rigid. I think that for newly diagnosed diabetics there is an enormous amount of support out there and I would happily want to be considered as another branch of support.