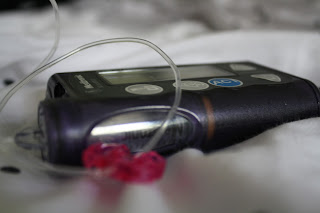 They say, "you'd forget your head if it wasn't attached," and although that seems obscure, how could you forget your head even if it WASN'T attached?  I really am starting to believe, I possibly would forget to bring my head along while heading out shopping or to go to school.  Yesterday I didn't forget to bring my head while running errands, but I did forget a vital part of me - my pancreas.

I usually take my pump off when I am getting changed because it is annoying to have to hold it in your mouth, or tuck it under your armpit while you try and put on a pair of pants or t-shirt.   It is 10x easier just to unclip it and set it on the bed, while I try to figure out what to wear.  Then it gets all the attention as I shift it from pocket, to side of my bra, to front of my bra, to back to to pocket as I try to figure out what looks best and argue with myself if I am striving for comfort or style today.
Yesterday, I quickly got changed out of my pajamas, setting my pump on the bed as I put on a pair of capris yoga pants and a grey sweater. The next step would have been to think, "okay, my yoga pants don't have a pocket, so I can't put it in there, so I guess I will put it in my bra, but I am not really going anywhere that matters, so maybe I can just put it in my sweater pocket for the day instead..."   this is what SHOULD have went through my mind, instead my old 5.5'er self forgot about the pump, grabbed my purse and car keys and headed out the door.
I went to the bank, I went to Winners, I went to Old Navy and then I went to Wal-Mart... as I was walking about, what felt to be 5 kilometres to get to the entrance of Wal-Mart (Easter has seemed to make the place a little wild) I began to feel up my sides, my back pockets (remember, no pockets on yoga pants) then my sweater pockets, then the side of my bra - I probably looked crazy because my cell phone was in my hand as well.     Then when I realized I    a. hid my pump well this time    or     b. forgot the thing!   I felt the site and realized there was nothing attached to it!
I didn't fret, instead I laughed thinking to myself,  how can something that I have hooked up to me 24/7 be forgotten so easily!   I never once thought about it until about an hour or so into my trip.   Nothing crossed my mind as I contemplated trying things on, and even bought a pair of black pumps at Old Navy!  Had I just spend a solid hour feeling non-diabetic? did I like that feeling more than I thought?  Kind of.
Once I got into Wal-Mart I decided to check my blood sugar to see what we were working with, a 9.8 [176.4 mg/dl]   not bad I thought... I would be spending at least another hour or so in Wal-Mart and judging my the lines maybe even longer than that. I figured that as long as I wasn't eating anything I would be fine.  I have not worn my pump before, but that was with it close by, not in another location like this time!
As I was leaving I checked one more time, more so for curiousity, and it was 8.5 [153 mg/dl] I knew I could at least venture to the Dollarstore before I had to get home and reconnect.   I hadn't had lunch at this point either, so I didn't think it would zoom up for no apparent reason, unless I got into the Easter candy I bought at Wal-Mart.
When I got home, there she was, sitting lonely, unconnected on my bed with a minuscule little puddle of potent tears. I sort of felt bad, leaving her behind and not even really noticing at all.   Sometimes being without a pump makes you feel free like that saying, 'no strings attached'  it's like you have nothing to worry about, when really you do have a lot.  For some reason that little pump vacation I had was good for me, and even though I should probably stick to more local pump vacations, i.e pump in bedroom, myself in the living room.... it wouldn't be so bad taking an hour break every now and then.
Kayla
Posted by Kayla Brown at 11:23 AM