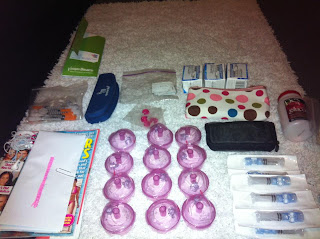 My trip to the Dominican is almost here, only one more sleep, then a partial one and I am off at 2 a.m Tuesday morning.  It hardly feels real yet, as I began packing the other day filling not only my suitcase but a quarter of Vince's which he is totally fine about since he is packing only a few things compared to my many things.   Hey! If I change my mind on what I want to wear, which we know how often that can happen...I want to have options.

The first task for packing was preparing my carry-on bag which contains ALL of my diabetic supplies including the extra insulin pump (loaned from Medtronic.)  In order to figure it out in my head, I put all the supplies on the floor to make sure I covered all bases. Yes, I use the supplies every three days, but when you're trying to pack it all, it can get a little confusing.   I knew that I wanted extra everything and after trying to figure out what extra meant, I decided I was going to bring all the sites I had in my drawer. So, originally I had about twelve sealed in a ziplock, but added the rest of the box which made it about fifteen at least.  I knew that that should be WAY more than I needed, seeing as I am going for eight days, which should work out to three site changes if I change my site tomorrow night.

I have travelled before, so I don't know why I felt so overwhelmed trying to figure out how much to bring.  I just started to fear the what-ifs, which I usually tell myself to stop doing or else I will end up living in a bubble.  So, the backpack is full of supplies, and hopefully more than I intend to use, because fifteen site changes in eight days would be dreadful.  I also put my note from my nurses in my bag just in case. I had to use this note before when I was in the airport in Panama, I always figure I am fine in Toronto, it is coming home when diabetes appears to be foreign to them at times (which is odd, because there are type 1s living in those locations...) Anyways, I like to be prepared with a note!

Of course I brought along alcohol swabs, reservoirs (not a million because most of the time those can be reused if anything were to happen) syringes, glucose tabs, an extra meter, an insulin pen, and a few other things to go along with it. I have yet to add insulin, of course, since it is in the refrigerator until Monday night.  I had a little room to put in a few magazines, gum and snacks, but really there isn't too much room left in my backpack for anything unrelated to diabetes.

I like to keep all my diabetic supplies on me, just in case.  It would be horrible to pack it all in a suitcase, only to lose the suitcase for some reason. It is better if I just have it on me, just in case I need it.  After being panicking about packing it all, I couldn't imagine watching it on a conveyer belt headed off into the unknown. I am just fine knowing it is on my back...or Vince's!

All in all, I am really looking forward to getting away after my last exam tomorrow.  I am going to say I may attempt to write, but chances are it won't be until I get back. So don't lose faith in the blog, just know the writer is lying on the beach thinking of what to write when she gets home!

Kayla
Posted by Kayla Brown at 7:00 AM