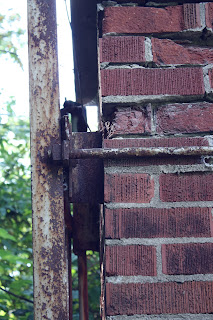 This year I had to take the dreaded science credit needed to graduate.  However, I was lucky that there is a science for 'not-so-sciencey-people' which is called, History of Medicine.   My first thought was, medicine = insulin = diabetes! and as soon as I got my textbook I flipped to the back of the book and looked for the word diabetes (which I tend to do the odd time or two just out of curiosity...)   There were a few pages listed and I began reading and getting really excited about the possibility of learning more about diabetes from a historical point of view and yes, I realize I worked within a museum about diabetes; however that marks back to Banting's times not the Egyptians!

My professor has brushed on some points about diabetes, but I think the bulk is yet to come.  Instead, he has talked more about the idea of disease in different contexts within time.  The gist of it all is that disease was seen as an ugly thing. This made me think whether or not I saw disease as an ugly thing. I mean there was less of an understanding of disease in the past, and disease was something that was directly linked to death because of the lack of medicine - so I can see why it was seen as ugly, but do people still see disease as ugly?

The word disease has a bad meaning all around, in fact I bet a lot of people living with diabetes don't say they have a disease; however, I have thrown that word around a few times not really thinking about whether it was an ugly word or not.  I know I have a disease, and I feel like my light about diabetes is a positive and beautiful one so I don't believe that saying I have a disease is going to taint the person I am.

But, it is an interesting topic to think about and even talk to other diabetics about, whether they say they have a disease or feel that the word disease is an ugly thing to have.