What You've Been Dealt

How many times have you told someone that you have type 1 diabetes and they replied with, 'I could never be diabetic!' or 'I could never put needles in myself.'  This reply is extremely common and most of us reply back with, 'well, when it's life or death...' and the person still doesn't believe they would be able to put up with the tasks you've been dealt for life. But, I think instead of telling that person that, 'of course they could do it!' 'No Problem!'  we should just reply with, 'and that's why YOU don't have diabetes and I DO!' 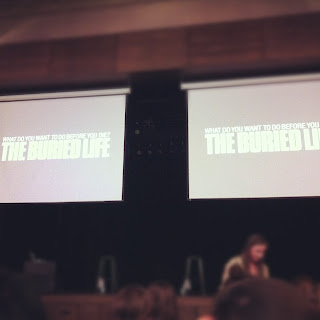 I think to what my mom always says, 'Your sister wouldn't be a very good diabetic, she doesn't remember stuff, loses stuff etc.' and that's true; however, maybe that is the reason she wasn't give diabetes and I was after all we share 50% of our genes, but somehow I was the one that ended up with diabetes. I was given diabetes because I can handle it and as much as I sometimes hate  taking care of it - I do it anyways.

Another link to this idea hit me when Shannon told one of her sons (regarding a cyst he had in his mouth)  if I got this, I wouldn't survive, if your brother got this he wouldn't survive, but you have it because you can survive no problem.  It really made me think about this concept in depth - does God (or whoever you believe in..) give you only what you can handle?

Last night, I went and saw the Buried Life which is an MTV show about four guys that basically made a ginormous bucket list and began scratching it off.  Personally, I think bucket lists are a great idea and have my own tucked somewhere around this room - but even though this presentation was about crossing off your lists, I found a deeper meaning in what we can do with what we have been given.

Throughout our lives we are given options, we meet people, we befriend people, we lose friends, we get to travel, we move away - all of these things develop us in giving us new knowledge, new understandings and I believe changes us in little ways all the time.  Of course, I had a big change when I was diagnosed with diabetes, it was something that continues to challenge me and change me, but because of that I have learned a lot from the experiences and have been able to create a new list based on my new experiences and make them happen with the confidence in knowing I was given this disease for a reason.

I love the idea of knowing that everything happens for a reason - I love the idea of knowing that what I am doing right now in my life is purposeful.  I will continue to set goals and work hard on achieving them (or as the Buried Life would suggest 'scratching them off the list') because everything that has happened in my life thus far has been all apart of the journey.
Posted by Kayla Brown at 10:21 AM