It seems like I have been complaining a lot this month, but in reality, I shouldn't be because life isn't too bad. This summer seems like it is racing by with one barbecue after another, which I love since that means I get to spend time with friends and family almost every weekend - something that doesn't happen as much in other seasons. However, with these barbecues, high blood sugar has been a key issue this summer, which isn't my ideal state of mind nor body.

Yesterday I was having a troubling time trying to keep my blood sugar low, when I recall what I ate, oatmeal for breakfast, tuna on a bun for lunch, crackers and cheese for a snack before dinner, hot dog on a bun for dinner and an apple with peanut butter for bed time snack, I can't really recall what would have angered my blood sugar so much. I felt like I was chasing highs with insulin all day long, and nothing was stopping them from going 12 mmol/L to 16 mmol\L back down to 10 mmol\L and so on.

The night time was the worst, I had set my alarm for 7:30 a.m because I had my health psychology exam this morning. But I literally got up every hour to pee. It almost felt like I would get up, use my pump as a guiding light, pee, head back into bed, then have to get back up in a matter of seconds. Of course when I was actually checking the time on my pump it was an hour to two hour time span, but still. 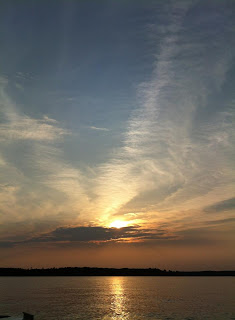 I woke up at 7:30 a.m with a blood sugar of 16.1 mmol/L which is extremely high for me to be waking up at, normally I am almost verging on low when I wake up.   My mouth felt dry, I was incredibly thirsty and once again I woke up feeling like I was going to pee my pants.  The joys of high blood sugar.   After making oatmeal and grabbing a banana to have for breakfast, I ripped out my site before bolusing, on purpose.    I was tired of being high and I had spent the previous day trying to compensate for what I felt like was undeserved high blood sugars.

Upon ripping out my site, putting a new one then bolusing for my breakfast, I prayed that before my exam I would be within a normal range.  I didn't check before I headed in because I have this amazing ability to act my blood sugar even if I previously was that number, but just didn't know.  I am currently sitting at a 19.0 mmol/L blood sugar which doesn't make sense once again, which is leading me to believe that maybe it is the insulin.

I am prepared to do one more big bolus, and see what happens.  If by lunch (in about an hour) it is still high, I guess I will have to throw away the reservoir of insulin and begin again.  It can be so frustrating when high blood sugars are constant, and don't seem to be caused by your lack of bolusing or food choices.  So we will see how this afternoon plays out. Hopefully I am back on track before lunch.