I always appreciate those around me that have helped with with my diabetes, but never really asked them how they felt when I was diagnosed or how they deal with my diabetes. I just know that they're always there for me physically and emotionally when I need them. I decided it was time to introduce my readers to someone that has been incredibly helpful along my journey with diabetes and before then of course, my mom. I mention her a lot, in the fact that she has been very supportive in my crazy endeavours and really helped me get my feet on the ground after being diagnosed. Honestly, I know I am the person I am today because of her and know that I wouldn't have handled my diagnosis half as well if it wasn't for her.

I asked my mom if she could outline a little bit about how she felt about having her daughter (me) diagnosed with diabetes, she wrote: 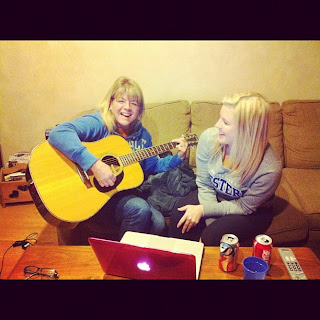 "When my daughter Kayla was first diagnosed I didn't realize that there was 2 different types of diabetes. I told Kayla that she should call the doctor to have her sugar checked when she told me she had drank 6 bottles of water before lunch time and I had also noticed she had been losing quite a bit of weight. My mom worried when myself and siblings were younger about us becoming a diabetic as her father was a diabetic. So maybe that was always in the back of mind and that could be why I thought she should have her sugar checked. I learned very quickly that I was uneducated in diabetes. The only thing I knew about my grandfather being a diabetic was that he had taken pills then eventually had to take insulin shots and that he had to eat meals at certain times and only could so much of certain foods but that is the only thing that I knew about diabetes. Boy have times changed! When Kayla called me from the doctors and said that she could possibly be a diabetic I said to her" you will probably only have to take pills to keep it regulated." It is a day I will never forget! The fear came when the doctors said that she will be admitted to the hospital and that she is a type 1 diabetic and that she will have to give herself insulin shots for the rest of her life. The thoughts that went through my mind is how are we going to handle this, especially when we saw the dietitans and nurse about counting carbs and the math that goes with it. Also about the lows and highs and how to handle them. The day she was discharged from the hospital was a scary day going to the grocery store to pick up food for supper and reading each and every food label to see how many carbs were contained in the product. Then rushing to get home so we can prepare the food and to make sure she takes her insulin at the correct time. What helped greatly is that Kayla is a well organized person and right from the get go she took control of her diabetes. Kayla was planning to go to college in the fall and I was nervous about her leaving home and living on her own, now I began thinking how is she going to move away from home and cope with school work while dealing with lows, highs and counting carbs. Thank goodness for technology that we could constantly keep in touch via text and computer so it felt less like she was away from home. She also was befriended by a wonderful family the Maheus who took her under their wing which helped a lot knowing that she could call upon them day or night if needed. This put my mind at ease greatly! Thank you Maheus!"

She also included that, "Oh yeah There were a couple of times I had to put on my supermom cape and race down to london with insulin but to tell the truth Kayla is my hero! How she copes and deals with her diabetes is amazing! She makes me a proud Mama everyday!"


When I asked my mom about any advice she would give parents of type 1 diabetic children, she responded with:

"The only advice I can give to other Mothers of diabetic children and young adults is to be very supportive and teach them how to control their own diabetes so when it is time for them to leave the nest the worry will be still there but not as great!"

My mom then sent me another message about my diagnosis, that she had waited to tell me until she knew that I was fully O.K with my diagnosis.  She said, " I would cry on my way up to the hospital thinking why did this happen to my daughter but would put on my fearless face by the time I got to her hospital room. I didnt want her to see how worried I was. I knew I had to stay strong for both of us so we would be able to deal with this disease."

It almost had me in tears knowing how strong my mom was in making sure that I was O.K and most importantly knowing that I needed her support and she was willing to do whatever it took.  I left for college within a few months of being diagnosed and had no fear in knowing that I was going to be O.K because I had the support of my mother.