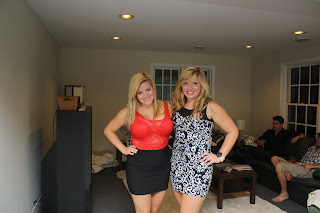 I'm at the stage of my life where I have moved now three times in the past three years.  This is because I am a student and as a student it seems nothing is really stable.   Moving three times I have had a few different roommates, and all have been introduced to the idea of diabetes by me, but mostly diabetes has just introduced itself without me even having to say anything.   Let's just say sometimes Mr. Diabetes doesn't care what you think of him.

I don't know what it is like to live with a diabetic, but I do know what it is like to live with diabetes.  I guess the biggest thing is an over all warning that at 4 a.m all the food in the house is available to the diabetic.  Yes, those chocolate bars, mine, that bag of chips, mine as well.  Of course, I promise to pay them back, but let's just say that if you have a special edition chocolate bar (if that exists) keep it in your room.

So far this year I have left lovely notes, including this one to Michelle last night:

"Dear Michelle:  You knew you were moving in with a diabetic so I think you saw this coming. Right nowhere blood sugar is 2.9 and while I was exploring the kitchen I saw those big fat marshmallows in our cupboard. Now, you know that is one of my favourite low treats - so I think that you were just thinking of me anyways when you bought them. Basically I ate one. I wanted more than one but since their were only 4 and I quickly then wanted raisin bread - I only ate one. So add it to the " IOU because I went low list " Ps I still owe you a pudding from that other night. Sincerely the diabetic roommate."


Besides the taking of the food there are a lot of other things that come with living with a diabetic.  Like the mess that trails behind.  Let's just say that if Hansel and Gretel were diabetics they would be leaving behind test strips and not bread crumbs... and the more I think about the story, maybe they were diabetic in search of a low treat only to stumble upon a gingerbread house... probably the best low experience they ever had.


Changing sites or screwing on caps can just leave a huge mess and not to mention a dangerous mess. Needles by the dozen and really I know I don't think that blood stained strips is gross, but the majority of people probably do.  Sorry about that! Of course there are other things that come with living with a diabetic, the random grumpiness and in my case the constant talk about diabetes because it's pretty much
a huge part of my life, so talking about it seems natural to me.


I give people credit that live with diabetics because they do have a big responsibility whether they realize it or not. So to the past and present roommates I have ever had, here is to you!