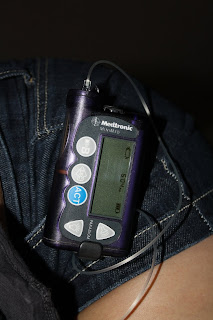 Since having a pump I have had a lot of other diabetics ask me whether or not my choice to go on a pump was worth it. I know that a lot of type 1's are finding themselves stuck between two pathways - whether to keep going with what's familiar or take a path that has unknown.

It's so easy to take the path that is familiar and that is why so many people get stuck in old habits. They may find themselves saying well this has worked, so why change something that isn't broken. It's true with a lot of things in life whether your diabetic or not. It becomes that much harder of a choice when you know that it is closely directed to your health and well being. The choice is yours, but the question is what impact will the choice make.

For me the choice at first was pretty clear - I wasn't going to go on the pump. As interesting as it sounded and as cool as you could make them look with skins - I was NOT going to wear something on me. It wasn't because I was hiding to the world that I was diabetic or because I was embarrassed of needing some type of device to keep me alive, but the fact that I would be stuck to my diabetes was absolutely absurd.

I don't know what struck me that made me change my mind. I really hadn't endured too many needles - it wasn't like I grew up being diabetic. I just had this feeling that the pump could do something for me that my needles couldn't. What it could do I didn't know. Still to this day I am sorting out the pros and cons of wearing my insulin pump, but I cannot see myself going back to needles in the near future.

When diabetics ask me if I regret getting it - I know that I don't because I have a choice to stop insulin pump therapy. I don't know exactly why I don't regret it, but I just don't. When diabetics ask me what I have noticed as far as improvements I basically say it cuts out a lot of needles in the long run; however, the needle to put it in is a little bit intimidating.

The cons of course relate to having to wear it all the time. As if diabetics don't have to think about their diabetes every second of the day - let's attach something to their body to remind them. It isn't exactly the best accessory to every outfit, but hey it's family now!

There has been quite a few times where I feel my site or my pump and think, 'oh my god' am I really diabetic? As if I just found out again - because I grew up non-diabetic and really haven't had a long run with it yet. I am still shocked that I am diabetic and I think it's one of those things that you just don't believe even though you are treating it, dealing with it and living with it every second of the day.