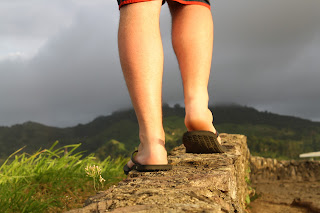 I've written before about putting ourselves in the shoes of type 1 diabetics born before the discovery of insulin.  The idea of having no treatment for diabetes,  besides the fatal starvation diet is heartbreaking.  I am sure we all feel every now and then that feeling of - can I get by with one more extra site until my supplies come in? or that horrible feeling when we reach in the fridge for insulin and there is no vials left.  The truth is, in our busy lives sometimes we forget the important stuff - but usually we can get it whether that is from a friend or the pharmacy down the road.

Strange enough yesterday I gave my friend a site when he reached out on Facebook saying that he had forgot to pack one.  I didn't think much of it, because I have been in that situation before, begging on Facebook for a site.   However, the strange part is that today I read an article about the only known type 1 diabetic survivor of the holocaust [I will post the link below] this article made me think about how easy it was for my friend to reach out for a site, for me to get my prescriptions transferred to a close pharmacy in need, or for me to just go online to order supplies - the thing is, if you're in a deadly situation - you just don't have that luxury.

In this biography, Ernest Sterzer talks about his experience living in the Nazi concentration camps.  Of course, there are lots of known biographies and literature about the Nazi camps, and personally, I studied Woman in the Holocaust for my history essay; however, I never came across a story like Ernest Sterzer's story.    Ernest was diagnosed before entering the camps, and as he was transferred from one camp to another he managed to fight, literally fight his way to stay alive.

I instantly began to empathize with him as he talked about having high blood sugars and wanted to drink gallons of the shower water that they bathed in just before switching camps, despite the water being disgusting and hot. As type 1's no matter where you are in the world, how old you are or what year you lived/live with type 1 diabetes we can all recognize those symptoms, feel those symptoms and empathize with those that have to go through them, especially when they are severe.

This story, which I read in the early morning,  sat with me all day, and still.  I find myself wondering how anyone could have survived type 1 diabetes within a concentration camp.  The definition of strength is not enough for this man and although he would have never remembered a life without diabetes, being that he was diagnosed at age three - that extra chore on top of such hardship would have been unbearable to most.

Although Ernest talks of giving up because it would have been much easier, plus he notes that he wanted to see his mother again, who had been killed in the camp early on.   He managed to pull through and he thanks prisoners and doctors along the way.   It makes me think how lucky I am to live in a time and place where supplies are a click away, insulin is a 5 minute walk and we don't need to worry where our next vial is coming from.

I realize that this is not the case for everyone, food is not always available, insulin isn't always paid for and support can be vacant.  But, for those where that is not the case, maybe we can learn something from Ernest, we can learn that giving up in this day and age shouldn't be on your mind.  We have the tools, the research in place, the communities established, diabetes can just be a part of your life not your entire life.