On August 11th, BD invited 14 individuals who represented a portion of the diabetes online community [DOC] to their Thought Leaders event. Some familiar faces and organizations were in attendance including Children with Diabetes, and a home-grown organization, Connected in Motion - an organization that played a significant role in my diabetes life.  There were also bloggers present including Karen Graffeo from Bitter-Sweet and  Scott Johnson from Scott's Diabetes.  Others included: 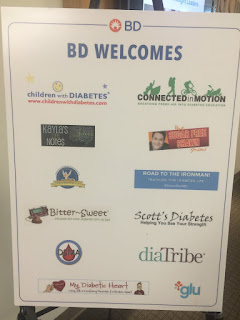 and of course myself, representing Kayla's Life Notes.

We were flown to beautiful San Diego, California to learn more about BD and their involvement in the diabetes realm of healthcare and beyond (way beyond) but most importantly we had the opportunity to show BD who we were as individuals living with diabetes as well as our roles in the DOC.  BD wanted to know what we wanted as patients and that was key. What that said to me was that diabetes products aren't only created with the key purpose of administrating insulin, or checking blood sugar but also to make living with diabetes easier and more comfortable.


I was surprised to learn that BD had been around for so long. In 1924 BD made the first syringe specifically for injecting insulin which began their journey into diabetes care. How remarkable to have been there since the beginning only shortly after Sir Frederick Banting discovered insulin in London, Ontario.  Beyond the products BD also has a lot of amazing resources for those living with diabetes as well as for health care practitioners including the FITTER and Diabetes Innovations US/Canada website.

I love to see a company interact with those that are living with type 1 diabetes and especially when they are also looking to create products to give us living with diabetes, more options.  Everyone with diabetes prefers something different, it's not a one size fit all type thing and BD gets that.  With their soon-to-be released infusion set, BD FlowSmart Technology  [available in the US and France first, then shortly after Canada] BD will be a part of the pumping game and I think that's awesome.