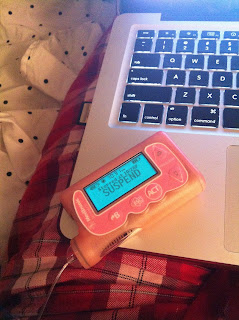 You know what? Diabetes can be frustrating. But you don't need me to tell you that. It's almost like it's a race, a race that doesn't stop and no matter how steady you are, unlike the tortoise you won't win the race. I am not going off into a negative mood; and by winning the race I don't mean not being able to live a fulfilling life with diabetes, but have you ever thought about how it always seems like diabetes is one step ahead of you.

As it has been made known I have been working out and attempting to eat healthier. I have had amazing days where my diabetes seems to be on my side, but other days when I just feel as though diabetes is purposely making my life as difficult as possible. I get that I am in charge of my diabetes, that it is up to me to give insulin, to check my blood sugar and to make adjustments, but at the same time I didn't apply for the job of a pancreas, yet some how I am having to figure out the tasks on my own without pay, without a degree in medicine and without enough allotted time.

I am writing now because as I was trying to fall asleep, I realized I was low.  LOW.  I honestly, want to go to bed, I have had a pounding headache all day, I wrote a three hour exam which included five essays early this morning and I am just all around feeling as though I have been one step behind diabetes today from lows earlier in the day to a couple highs after dinner.  Now, it's time to put the day behind me and I am lying awake because diabetes wants me to eat and guess what? I am not hungry.

I guess overall I am frustrated. I am frustrated because I am trying really hard to do everything that I can and I know I am doing everything I can.  I think it is impossible to be perfect in the world of diabetes. After wearing a CGM for a week I feel as though I am bound to have wild days that are out of my hands and honestly, today has not been a good day of reflecting upon my disease.

I am still grateful for the wake up call diabetes gave me, the opportunities, the friends, but at the same time I wouldn't wish this on anyone. The feeling of having no control, the feeling of having to leave the gym because you are feeling low, the feeling of waking up in the middle of the night sweating, hungry, confused...that feeling will never go away until there is a cure.