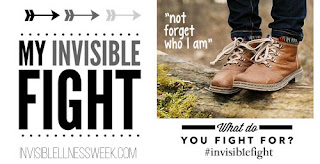 'Invisible illnesses'  a term used to describe illnesses that are chronic but may not be visible such as depression, ADHD or Asthma.  At the end of September - early October is Invisible Illness Week, and I get that that is not anytime close, but I think that the idea deserves to be recognized all year round, because those of us with invisible illnesses are fighting everyday.   So, this week, today, I decided to talk about it.

I never really thought about the connection of an invisible chronic illness and diabetes.  Often I see copy and paste esque statuses on Facebook that highlight the idea of having an invisible illness but I never thought to relate it to my own situation as a type 1 diabetic.  Living with diabetes I see my disease very well, it is not invisible to me.  I see my insulin pump, my tubing, my sites and CGM, I see the blood on my finger tips and the carbohydrates on the cereal box. I see the numbers from high to low and the blood test strips in my purse and car.  There is lots of visibility going on when living with diabetes.

But, to the public, often no one realizes I have diabetes. Often my insulin pump is tucked neatly in my bra or pocket, my meter is in my bag, along with my strips, and low supplies. I rarely bust out my supplies mid shopping trip or while relaxing on a patio, so to many people I am just your average person living life as normal. What makes diabetes invisible is just that, I can perfectly go about my day without anyone questioning my health. That being said, I could go low or really high and cause a scene, but for the most part, I can linger around town without anyone noticing that I am dealing with diabetes 24/7.

I think that this week that will come around again this fall, the important thing to remember is that everyone is fighting a battle, and to really think twice about making any judgements about anyones life.  I may not look like I am dealing with anything serious, but we all know how serious diabetes is. I am looking forward to this week, to be able to raise even more awareness about invisible illnesses.