There is that low feeling... the signs and symptoms that creep up on you when you've just finished a run or have woken up suddenly in the middle of the night.   I often know when I wake up if I'm feeling starving - I am low same with any sort of headache, sweating or shaking.  However, sometimes you FEEL low, but you're not actually low....

Last night I was tossing and turning and it wasn't that something was on my mind, but more so I felt like my head was feeling strange.  I was highly doubting that I was low because I just didn't have any of the other symptoms and truthfully I was hoping I wasn't low because I was far from hungry.  After about an hour, I pulled myself out of bed and tested.  5.6 mmol/l (100.8 mg/dl) so, back to bed I went.  Also feeling good that when I am low I feel  excessively hungry because not wanting to eat really makes it hard to accept a low. 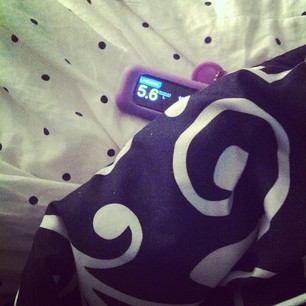 So, after crawling back into bed and attempting to sleep again, I couldn't shake my head feeling so strange.  Finally, I fell asleep waking up realizing that I must have just had a starting of a cold or headache despite constantly feeling like I had low blood sugar.    Diabetes wakes you up more than most would like to imagine.  It makes people raid cupboards and wake up to wrappers of candy and empty juice boxes littered around them.

Even though I didn't actually go low last night that feeling that most non-diabetics would attempt to ignore - kept reminding me of going low, alerting a certain amount of anxiety over whether or  not I was actually going low, wondering if my meter was wrong, and not knowing if I should fall asleep or not.   As much as going low at any time of the day is daunting, going low at night can be scary and irritating.

One of my friends visited me last weekend and we were talking about going low and more exact the feelings we feel. My mom happened to be sitting with us and was curious as to exactly how hungry we felt when we were low and it was hard to explain that extreme feeling and the desire to eat everything, only to lay back in bed with an upset stomach.

My first low ever (knowing I was diabetic) was when I was in Mexico on a cruise in April 2009.  I had not yet experienced one that I was able to check with a meter, and we had just climbed the Mayan Ruins (pretty exciting first low...)   I don't exactly remember how I felt, but I recall feeling 'strange' and since I was with my uncle who also has type 1, he encouraged me to check and lone and behold I was experiencing my first low blood sugar.

Now, after probably hundreds and hundreds of lows I can recognize the signs for the most part. The odd time you will get that weird low that somehow didn't let you know it was coming.   I am aware of when my blood sugars are dipping even below 5 which my nurse has encouraged me not to treat until I am below a 4, but I find this hard to do since my body acts low under 5.

It's funny how this feeling of light headedness, busyness, sweating, confusion and hunger is all something that diabetics go through on almost a daily basis. It has become a part of our life just as much as insulin dripping into our bellies and blood bleeding from our fingers.  It's all apart of the diabetic life.