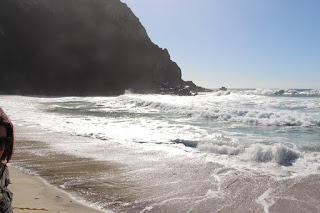 I remember sitting in the hospital, in their common room which was filled with well-loved toys and the sound of cartoons playing on the small t.v in the corner. I was on the Pediatric floor although I would be turning 19 within a few short months. I had visitors come in and out and doctors and nurses popping in to check up, give insulin and draw blood. No one talked about insulin pumps or continuous glucose monitors, they just went through the process of teaching me how to give insulin and how to check my blood sugars.

I  do recall my Uncle saying to me while I was in this common room, "one day they will have a watch that tells you what your blood sugar is," and I thought that that was such a weird concept. Wearing something that told me what my blood sugar was? But, this technology was very real, and it was already thought of, it was making waves but the wave just hadn't hit the shore yet.

Now, you can wear a watch to tell you what your blood sugar is, and you can have various devices giving you this information with beautifully lit screens and graphs, all becoming so popular and almost a standard of care eight years after my diagnosis.  I have met two newly diagnosed adults who within a month of diagnosis were put on continuous glucose monitors, a tool that will benefit their management so much.  I imagine what it would have been like to have the opportunity to do the same. Would I have understood what was going on better? Would I have been less disappointed in the random highs and lows because I could have seen them coming? I imagine those that were diagnosed say, 20, 30 years prior to my diagnosis and what they think of the new technology.  I imagine it is like my grandparents when they realized we could communicate via internet.

Now the next step is giving this opportunity to all that would love to have it. It would be great to see continuous glucose monitoring become apart of how we treat diabetes and as someone living in Ontario, I would love to see it covered alongside the insulin pump.  This technology has so much potential in making life easier and for those living with diabetes.