I trust you, sometimes.

Having an insulin pump is awesome, sometimes.  The truth is, we rely on our insulin pumps a lot more than I think we should.  Often I leave the house, insulin pump in pocket but no backup in plan nor mind.  I forget to pack extra batteries or syringes or insulin and I never really fret about it until the moment happens when the pump decides it is going to take a break.

I lucked out that nothing happened to my insulin pump during the climb.  No frozen insulin, no delivery errors, no low battery warnings - really the only thing was the sensor that would sometimes malfunction but I was always able to restart it.   I was prepared for anything to go wrong on Kilimanjaro though, I brought spare batteries, insulin, syringes even an extra insulin pump. 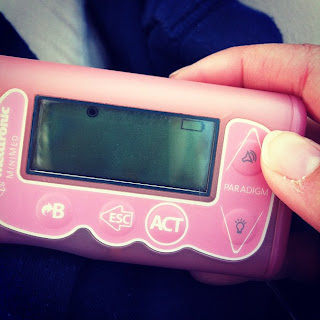 However, now home my insulin pump decided to make a scene at the fair yesterday afternoon. First, it gave me a no delivery warning after attempting to bolus for a treat at the fair.  I tried again, and again. But it wouldn't work.  I decided to wait a bit and then try again. We paid an arm and a leg to get into the fair and I didn't want to ruin the moment by having to leave or stand around for too long.  So, while waiting in line for a ride it started to alarm.  Now, my pump has alarmed before when I have worn a sensor, but never for anything else. It was like a a fire alarm in my pocket and to be honest, at first I had no idea that it was me.    I pulled it out as it was going off like crazy and looked at Vince - we both had no idea what to do.

He suggested taking the battery out. It didn't say low battery at this point, but everything was flashing and going wild.  I took the battery out but after trying to put it back in, it failed the battery test and wouldn't let me do anything after that.   Thankfully, Vince's parents were coming within the next 30 minutes and were bringing me a battery.  Once the pump had a new battery it was much happier and gave me insulin which in turn let me be able to have dinner and a piece of cotton candy.

I couldn't believe the timing of things - I mean, I am glad it didn't happen in Africa, but at the same time, why couldn't it have happened at home rather than the fair!