I've experienced jet lag before, most recently, besides now was when I flew from Tanzania to Toronto which was a 7 hour time difference. The time difference between Australia and Toronto, however is 16 hours.  It is an incredible time difference, making me feel like I am one day ahead of everyone else here at home.  Managing diabetes with jet lag has proved to be interesting as well. While I haven't noticed too much fluctuation with blood sugars, I find that the signs of jet lag are simply mimicking some of the feelings of low or high blood sugar due to being exhausted, having off hunger (i.e wanting to eat food in the middle of the night but not in the morning) and overall grumpiness with trying to regulate my bodies clock.  It's confused.

I noticed jet leg a bit when I arrived in Sydney on November 22nd.  I had started my flight on November 20th here, but arrived in Australia what seemed like two days later.  Both Russ (the other Canadian I was travelling with) and I found ourselves getting up extremely early then falling asleep by mid afternoon.  We got a lot done in the mornings, but often we were fast asleep before the sun went down. Eventually we got into the rhythm of things and by the time the conference had begun I know that I was waking up at 7 am struggling much like I do when I am at home. 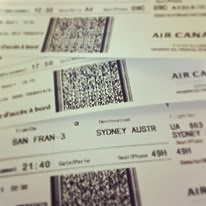 Eating habits like I mentioned proved difficult, I was waking up low often and because I was getting up early, basically before breakfast was being served at the hotel.  I found myself having to treat lows before getting the opportunity to have breakfast.   We were eating lunches and dinners at earlier times as well.   It was interesting getting used to the changes.

Other changes had to be made with times on the insulin pump as well as the meter which is important because if you have set basal or bolus rates at specific times they need to be happening at the correct times.  I think it can be tricky to make adjustments since your body may feel like it is in Toronto, but your actions, food consumption and mind is in Australia. So, playing around with rates isn't a bad idea.

This week has proven to be difficult as I caught a cold on the flight home and the change in temperature from Australia (mid 20's) to Ontario, Canada (negatives!) is a big shock to the system.   I also am dealing with stress through catching up on missed lectures and writing exams this week - three in total.   I know that it will be all worth it after Friday's final exam, but in the meantime, I am battling with diabetes, a cold, jet lag and studying... a.k.a procrastination.

Kayla
Posted by Kayla Brown at 1:16 AM