This past weekend I attended a baby shower for one of my friends that I have literally grown up with. This was the first baby shower I had attended for one of my own friends, usually it had been my mom's friends or a relative.  I couldn't help but notice that every other person in attendance was pregnant, or at least it seemed that way.  I was so excited and happy for my friend and couldn't believe that we were at this stage in our lives.

That day was pretty busy, I stopped by Vince's parents after wards to have dinner, but then had to leave to babysit for the rest of the night.  After babysitting I went back to Vince's house to go to sleep, which I  was so ready to do by that time.  However, I couldn't get to sleep and I was feeling a sense of sadness overwhelming me. 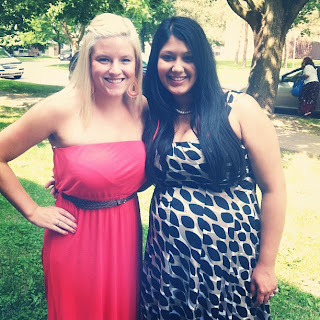 It isn't that I want to have a baby now but it is a goal of mine to eventually have a baby and I know before I realize it will be that time to start planning.  When I was first diagnosed with diabetes I was curious to know if I could still have a baby. It would have been devastating to me if they told me that I couldn't.  But, all of the doctors and nurses seemed optimistic that it was something that was possible. Since being diagnosed I have met a lot of mothers with diabetes as well as people that are currently pregnant with diabetes.

While it isn't an easy task, much like it isn't always easy for a non diabetic either, I have full faith that one day I will also be able to start a family.  However, for some reason when I was laying in bed I couldn't help but think about the what ifs.  I broke down and surely caught Vince off guard, but he was totally supportive towards me and that is what I needed.

It's hard to live with a disease knowing that it isn't only effecting your blood sugar levels, but also everything else that comes along with living life.  There isn't a time when I get a break from diabetes and as much as a positively try to push through it all, there are times when I can't keep a smile.